An unexpected meeting became the start of 20 years of collaboration that would change the Swedish lift industry. Read the three-part story of how SafeLine started and revolutionised the industry 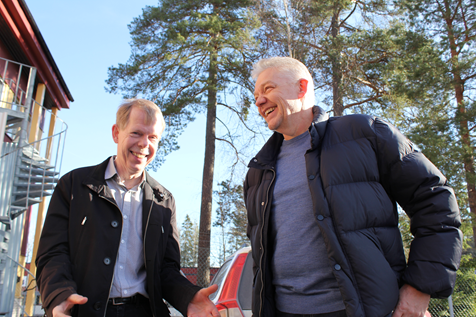 It all started with an advertisement. In 1993, Tomas Jäderberg flipped through the electronics section in the Yellow Paper, when an advertisement for an emulator for sale caught his eye. Tomas had ever since he was a child been interested in electronics and he was always on the lookout for new gadgets.

The advertisement was signed with a number not far from where Tomas lived, in the south of Stockholm. He decided it was worth a visit.

The one behind the ad in the paper was Lars Gustafsson. Lars, or Lasse, had worked in the lift business as a technician since he was 15 years old. When he later wanted to learn about the theoretical side of electronics, he entered a community college and started manufacturing components in the basement of his home. This meant he was always short of space, hence the ad.

It did not take long for Tomas and Lasse to realise – when sitting down for cups of coffee at Lasse’s kitchen table – that they had many things in common.

– We were both stuck in our jobs and wanted to do something different with our careers. We discussed development and shared a passion for electronics, but from different places and in different ways, Tomas recollects.

For Lasse it was more about the practical side of things, while for Tomas it was the problem-solving. One cup of coffee turned into eight (Tomas can usually handle two) and day passed into night-time before Lasse and Tomas had finished talking.

None of them knew it at the time, but the foundation of what was to become SafeLine had just been laid out. It would take years until Lasse and Tomas worked together for the first time.

Lasse has always, at least as long as he can remember, had many ideas – but no one listened to them at the lift company where he was employed. He therefore quit his job and started his own company – a longtime dream of his.

In 1995, Hisselektronik AB was founded. Through the company, Lasse sold floor displays and control systems for lifts that he had manufactured himself in the basement of his house. Things were going alright, but not as good as Lasse knew it could.