An unexpected meeting became the start of 20 years of collaboration that would change the Swedish lift industry. Read the three-part story of how SafeLine started and revolutionised the industry

It turned 1998. A new industrial standard was on the rise in the European lift business, the EN 81-28, setting new safety demands for lift emergency telephones. A lot of the old telephones could only dream of fulfilling the new demands.

Those available on the market were technologically old-fashioned and functioned poorly, something Lasse had experienced first-hand with his many years in the industry. He saw a gap in the market, but he knew that he had to act quick and deliver a product both practical and of quality for it to break.

For that, he needed Tomas.

Tomas had worked with telephony all his career and had just the right kind of skills Lasse needed to deliver a really good product in accordance with the new standard. Tomas had always wanted to work in development, so when Lasse approached him with the offer, he was quick to accept.

The development of what would become the first SafeLine telephone started at once. Lasse knew with his industrial know-how that the most important thing of all was that the telephone functioned flawlessly, but at the same time was easy to install. Put simply: no hassle.

Lasse had free access to a lift in Stockholm that was infamous for its lift shaft statics.

– I knew if we could get it to function there, it would work everywhere, says Lasse.

Lasse and Tomas rode the lift up and down all day, trying out new methods, but things went poorly. They couldn’t get rid of the statics, and the exact placement of the telephone equipment largely decided how good the reception was, something often the case with the equipment of that time.

– Lift shafts are pretty tricky with the statics in calls, there are so many electronic cables disturbing the signals. So, I went home and read up all I could on statics issues, Tomas says.

Tomas returned with an equally brilliant as simplistic solution: the cables from the car up to the machine room should run through a current loop, minimizing the statics. A completely unique solution in its context.

It worked. Wherever you placed the voice station in the lift car (the part of the telephone which you talk through), communication could be upheld without any statics or disturbances. They had a working product.

Tomas produced the first SafeLine 2000 units by hand, which Lasse later sold to different lift companies in Sweden. It was an instant hit, and it did not take long before all the telephones were sold out (those units still work flawlessly and remain in the lifts to this day, 25 years later).

Now came the next step: mass production of products to supply the increasing demand. For Tomas to produce thousands of units by hand in his home was out of the question, so the solution had to be an external party taking on production – with a risk of lowering the standard. 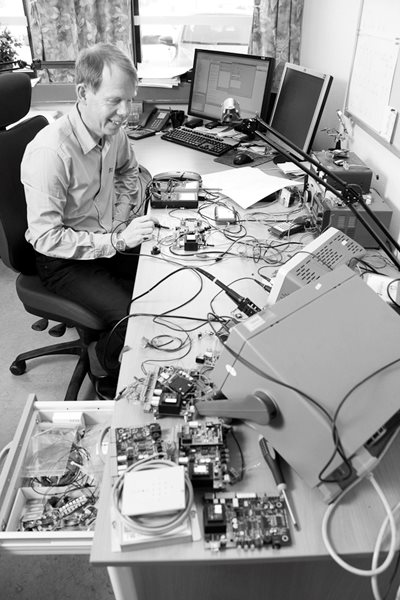 To uphold the very crucial quality and to make sure all units were functioning when shipped off, Tomas arranged a testing protocol that all units had to be tested through.

– I knew we needed a high standard of testing to maintain a high quality of product. Our cornerstone philosophy has always been to test every step in production. I had a music room in my house that became a testing room. There, I tested the fifty first units manually from the test protocol. More than those fifty, I could not do. It’s from that testing protocol we then developed our fully automatic testing system.

Tomas is convinced that the testing systems laid the foundation of SafeLine’s successes, the thing that kept customers coming back – the reliability.

SafeLine 2000 was officially launched and had great successes, much thanks to Lasse’s network in the industry.

– One competitor went down immediately upon launch, while some lasted a bit longer. No one was satisfied with the products they offered anymore, says Lasse.

The quality of the product and the simple solutions in combination with the new standards created a high demand that SafeLine were the first to supply. The future had revealed itself.

Continue to part 3.
Did you miss the previous part? Click here to read part 1.